Welcome to Bremen/Germany, and welcome to our new blog for international students.

This city will be your second home for the next years, and we would like to provide you with some interesting and helpful information about our beautiful hometown in northern Germany. 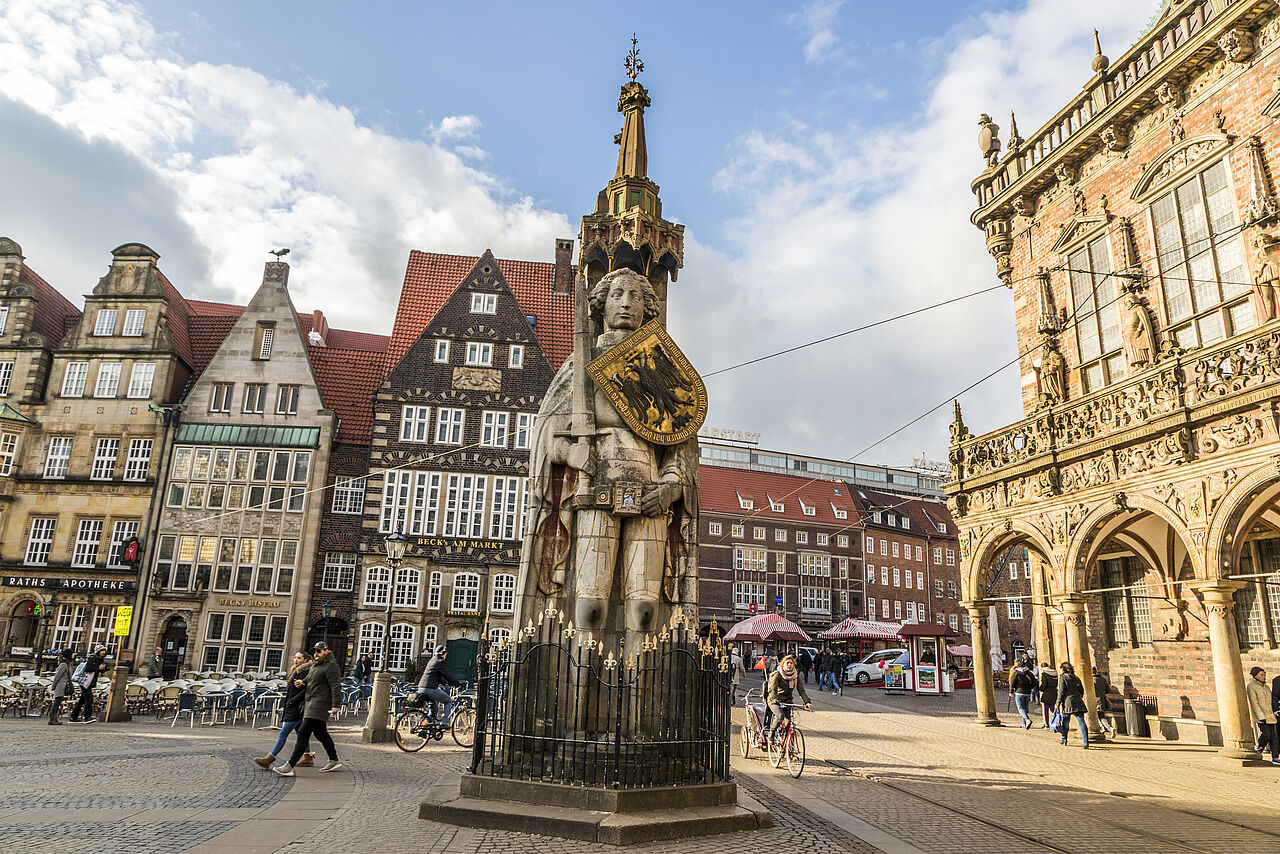 Bremen is situated on the left and right side of the river Weser. About 569.000 people live in the city, 2.7 million inhabit the Metropolitan Region of Bremen/Oldenburg. Bremen is a city state of its own, actually the smallest state in Germany measuring only 419 km2, and has an exclave port town called Bremerhaven about 60 km up the river on the coast of the North Sea. Bremerhaven is the fourth biggest port in Europe and among the 25 biggest in the world. For example, nearly 2.2 Million vehicles were shipped through this port in 2018. Bremen is considered the greenest bigger city in Germany and has four rivers as well as eleven lakes you can swim in.

Bremen belongs to the famous network of so-called Hanse Towns, which goes back to the 14th century and included cities like Hamburg, Riga and Stockholm. It was a commercial organization in order to secure safe passages and free trade between the cities as well as protection in case of enemy attacks. Commerce and trade have a very long tradition in Bremen. Here you find the oldest German Chamber of Crafts (1849) and Chamber of Commerce (1451) and the second biggest Mercedes Benz production in Germany employing 12.500 people. The most consumed beer in the world, our famous Beck’s, is being produced in our city. Almost 3000 bottles of it are drunk all over the world – every minute! Among important inventions made in Bremen are the roller blinds and Heinrich Focke’s first fully functioning helicopter. Over 37.000 students enjoy Bremen’s eight colleges and universities.

Bremen’s historical city center is declared World Cultural Heritage. Our famous “Roland”, the highest stand-alone statue of the Middle Ages (over 10 meters) and the Town Hall with its cellar that stores a 1000-liter-barrel of our oldest white wine from the year 1653 are two of the major tourist attractions for the 1.5 million visitors we welcome here every year. You have probably heard about the Grimm Brothers tale of “The Bremen Town Musicians”, four lost animals who came to fame in our town. A statue in front of our Town Hall reminds us of this tale whose 200th anniversary we celebrated in 2019.

The city hosts the fourth biggest music festival in Germany called “Breminale” and is one of the leading bicycle cities in Europe right after Copenhagen and Amsterdam. If you are interested in plants and gardening, our Rhododendron Park will amaze you with the second largest collection of rhododendrons in the world, including 3000 cultures and almost 600 different types of these beautiful heather bushes.

Another landmark is the unique “Fallturm” (gravity tower) of the University of Bremen, which is used for zero-gravity experiments. There are guided tours if you are interested in learning more about the scientific research undertaken there. The lounge on the top of the tower also serves as an event room. Wedding couples can have their official ceremony there, for example.

Perhaps you remember the world-famous novel “Robinson Crusoe” from your early school years? You are probably going to be surprised to hear that Crusoe was the son of a merchant named Kreutzner from Bremen, who immigrated to England, where his last name changed into English Crusoe.