Brussels is an exciting place where decisions are made that shape politics and ultimately all of our lives. These weeks, solving the European crisis remains an ongoing challenge as the EU member states are fiercely debating the EU Budget plans for the years 2014-2020.  MES students had the opportunity to get first-hand reports from some outstanding thinkers when they visited Brussels Nov. 11- 16, 2012. The speakers included Bremen MEP Helga Trüpel on the current state of EU budget negotiations, Prof Jeremy Rifkin on the Third Industrial Revolution and EU President Barroso in his welcome speach at the Jean Monnet Conference "Sustainable Growth in the European Union: The role of Education and Training" (Nov. 13-14, 12). "How much Europe do we want? Can a smaller EU Budget guarantee necessary innovations? How to combine national budgets and the EU budget? How to make the EU economy sustainable?" were some of the major questions discussed.

Prof. Dr. Friedrich Lehmann has been elected best lecturer of the year by last year´s MES students. Prof. Lehmann, founder of the programme and course director since 1999, teaches European Law.

US student Kristen Klug was awarded best student of the year. Her achievements were really remarkable!

Crisis of the EU

(August 2012) Dr. Dieter Wolf, political scientist and a long-time lecturer of the MES program, will analyze the crisis of the EU in a new lecture this Winter semester.

They also visited the urban development site "Überseestadt" which has profited from European funds as well.

Dr. Dieter Wolf, University of Bremen, was elected best lecturer of the year by the MES graduates 2011. Dr. Wolf has been with the programme from its very beginning. He teaches Theories of Integration and The EU as a Global Player. Congratulations!!!

Nicholas Paul Stone from Canada has received the Certificate of Excellence Award 2011 for his achievements. Nicholas loves to do research and to develop academic theories, maybe more than any other student in class. He has achieved very good grades and put lots of energy into organizing Europe Day at the IGC together with a group of equally dedicated students. At the same time, Nicholas got along very well with his fellow students and showed a great deal of commitment to his studies, the programme and the team. It is this mixture of high academic potential and personal skills that make him really special. Congratulations, Nicholas!

MES alumni Shota Shevelidze from Georgia has recently published an article on  ‘NATO’s New Strategic Concept: Implications for Georgia and Ukraine’ on the web page of Cyprus based ‘International Security Forum’.

Mariana Constantinov (Moldovia) and Tsotne Zurabiani (Georgia) were awarded a first price in the Open Ukraine Foundation competition. The competition appealed to stimulate regional cooperation in the research field and to promote collaboration among young researchers from the Black Sea Region. The winners will be awarded a scholarship to participate in the International Neighbourhood Symposium in Istanbul from June 28 - July 3, 2011. http://www.openukraine.org/en

As part of the European week activities in Bremen, the Master in European Studies Programme / Hochschule Bremen organized a Europe Day at the International Graduate Center on May 13 from 2 till 6 p.m. The event was organized by students for students.

Photography Contest: Y-our Europe is an amateur photography contest launched for the Europe Day celebrations. It aimed to gather the perception of the European Union among participants. Selected photos were exhibited on the Europe Day and voted for a final prize.

Identity Wall: The identity wall was a visual representation of the EU where guests of Europe Day were invited to participate. What does the EU mean to you? Do you feel like a European citizen? Participants used words or drawings on the wall to identify their perceptions about the EU.

Quiz: How much do you know about the EU? There was a quiz at the event that asked numerous questions about general EU trivia. It not only tested the participants' knowledge, but also helped them to learn more about the EU as an organization.

Round Table Discussion: The EU in global affairs. It analysed the role of the EU abroad, and used current events to highlight the EU potential to be an effective global actor. The recent issue of democratization in North Africa, immigration and the Japanese nuclear crisis were some topics of discussion.  Participants included Dr. Joy Alemazung from Cameroon, Dr. Dieter Wolf from the University of Bremen, Gülcin Erdem from the Turkish Consulate in Hannover, Giuliano Molis (MES student from Italy), Felix Bodermann (MES student from Bremen). Most importantly, the discussion was meant to stimulate the ongoing debate on what the EU should do to be a global actor and can it do so given its current structure.

Reception: MES students spent hours in the kitchen preparing a taste Buffet which offered guests a variety of culinary tastes that represent part of the diversity of the EU. Donations for the Japanese victims were welcome.

(Feb. 2011) Twice every year, we select 3 students from the MES program who will teach a short unit on the European Union at the Hanzeuniversity Groningen in the Netherlands. The event takes place at the beginning of the International Law program. Every time, our MES students come back excited! 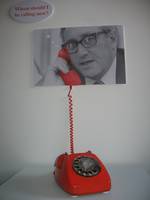 Enjoy and get inspired by objects designed by international students of our ‘Master in European Studies, M.A.’ programme. The objects visualize student’s perspectives on the European Union and its development during the past 10 years. Students from Latvia, Romania, Russia, Turkmenistan and the US present their inside and outside view on the European Union and its political, economic and cultural aspects.

Take a look at the new exhibition brochure!

Harry Smeltekop from the Hanzeuniversity in Groningen, The Netherlands, has been voted  MES lecturer of the year. Mr. Smeltekop is teaching the European Law Seminar “Intellectual Property Rights in the European Union” to international students of our Master in European Studies, M.A. programme. His teaching is imbedded in the framework of the well established university partnership between the Hanzehogeschool Groningen and the Hochschule Bremen. It is supported by the ERASMUS staff exchange programme of the EU.

The decision to honour Mr. Harry Smeltekop as MES lecturer of the year is based on students´evaluation forms. Master students from 18 different countries world wide with an academic background/first university degree in Law or Business/Economics or Political Sciences gave him the highest marks out of 20 international lecturers in the academic year 2009/2010.

After graduating in 1995 Prof. Smeltekop started his professional career as attorney-trainee at the Amsterdam IP niche boutique of Steinhauser Hoogenraad. After four years he was invited to join Unilever NV/Plc as global trademark counsel foods (Spreads & Cooking and Tea) at the head offices in Rotterdam and London. In 2004 he moved back to Amsterdam to open his own law office and also to participate as lecturer Intellectuel Property at the Amsterdam Fashion Institute and at the School of Law of the Hanze University of Applied Sciences of Groningen. Currently he works as Attorney Intellectual Property Law, advertising and Internet (IT) Law, competition and privacy issues (Yspeert vwl Attorneys). He has been teaching at the MES Programme since 2008.

We are proud to have Mr. Smeltekop as part of our MES teaching team! Bremen.